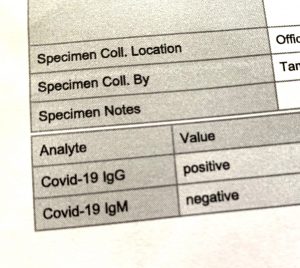 As memorable as 2020 has been for all of us, today is another day that will always stand out. After a simple 10 minute finger-prick test in West Columbia, I tested positive for Covid-19 IgG antibodies.

It’s certainly good news knowing that I may be able to help doctors with any studies for the pandemic and perhaps be able to give plasma with antibodies to those who are severely ill trying to beat the virus. It’s also curious to me because somewhere, in my past, I must have come in contact with the virus. The nurse says it may have been months ago, but it was all news to me.

Looking back, I remember in January when Karen and I kept JC (our son) out of school for about a week. He had a fever, aches, and other symptoms associated with the flu; but he tested negative for the flu and negative for strep. We thought that was strange and didn’t know what he had, but he got better after that week. Life moved on and then several weeks later, the world learned of Covid-19. All during that time I never felt a thing, but I had a lingering sense that maybe JC had it and maybe I might have had it.

Over the past several weeks, the state closed down, the State House went on a break, and like many fortunate to still have work – I worked from home. Again, I never had any symptoms, but when I think back there were a few days where I thought my allergies were bugging me. Minor aches…never felt feverish. Was my body reacting to the virus? Who knows? Nothing really caught my attention and I was even still running a few miles at least once a week since January.

The reality was I think I might had been asymptomatic. I never felt a thing.

Karen, JC and Emma will get tested later this week. If they have antibodies, I am pretty sure we would have all passed it around some time during the “lockdown.” None of us have had any of the symptoms and hopefully we weren’t around people during whatever time we may have been active with the virus.

Everything happens for a reason and today was another example. Had Richland County not botched another election, reporters probably wouldn’t have sought me out. But they did and one of those reporters and I also happened to talk about Covid. I shared with him my desire to eventually get tested, just to get rid of any lingering doubts and see if maybe this virus could have been around earlier than reported. Maybe back in January when my son was sick. The reporter let me know about a local facility where you can walk in, sign up, get tested with finger prick, and 10 minutes later you would know if you have the antibodies.

He was right and that’s exactly what I did this afternoon. If you’re curious like I was, or obviously if you have any symptoms, it’s easier than I thought to now get tested.

And if DHEC and others get my data and want me to donate blood or join a study, sign me up. God obviously has something in mind that I never did!