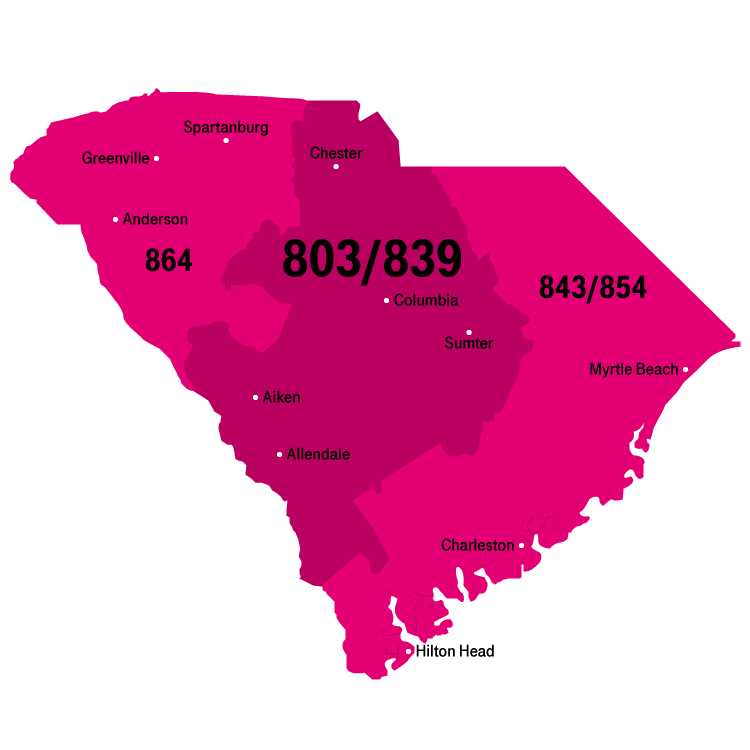 Area code 803 is the area code for most of central South Carolina. It is anchored by Columbia, the state capital. It also includes most of the South Carolina portions of the Charlotte (North Carolina) and Augusta (Georgia) metropolitan areas. 803 is one of the original 86 North American Numbering Plan area codes assigned in 1947.

Until 1995, it served the entire state of South Carolina.[1] In 1995, the Upstate was split off as area code 864. This was intended as a long-term solution, but within two years 803 was close to exhaustion once again due to rapid growth in Columbia and the coastal region, as well as the proliferation of cell phones, pagers and fax machines. Additionally, portions of the area code are part of the Charlotte and Augusta LATAs, and several numbers in Charlotte’s 704/980 and Augusta’s 706/762 aren’t available for use (see map). To solve this problem, in 1998 the coastal region became area code 843.

In late May 2020, 803 will receive an overlay, 839. The new area code will only be assigned to new subscribers; everyone who has an 803 number can keep it. The implementation of 839 will make ten-digit dialing mandatory in the eastern two-thirds of South Carolina. This would ease customers from the burden & expense of changing numbers. Permissive calling began in late October 2019, and will end in April 2020; after that, those who attempt to use the traditional 7 digits will risk hearing a recorded message to remind them.[2]