In July 2008, when I first shared Ashley to NathansNews readers, she was a rising 5th grader at Oak Point Elementary and a member of the District Honors Choir.

Fast forward almost 7 years later and here she is a junior at Dutch Fork High School and is one of only two area juniors selected by Mid Carolina Electric CoOp to head to Washington for The Electric Cooperative Youth Tour. Congratulations again, Ashley!

The Tour has brought high school students to Washington, D.C. every June since the late 1950s. Students apply and are selected for this program by their local electric cooperative. We believe that students should see their nation’s capital up close, learn about the political process and interact with their elected officials.

The featured speakers during Youth Day provide insight to the important roles electric cooperatives play in their community. Students gain a personal understanding of American history and their role as a citizen by meeting their Representative and Senators.

Nearly 50,000 students from rural areas and small towns across America have participated in this program. Some of our Youth Tour alumni have gone on to design airplanes, to lead companies and to serve in the highest ranks of our government, including the U.S. Senate. Don’t be surprised if you run into a former Youth Tour participant who is a congressional aide on Capitol Hill. While several of our alumni work in Washington, you will find even more alumni in your own community.

Below is Ashley in 2008 on Nathan’s News 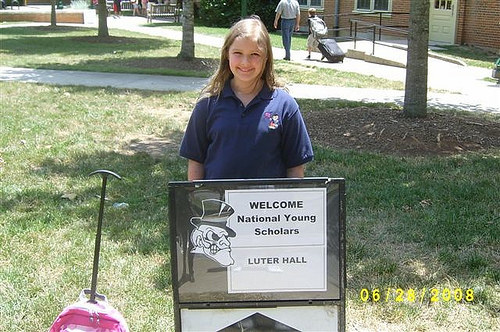