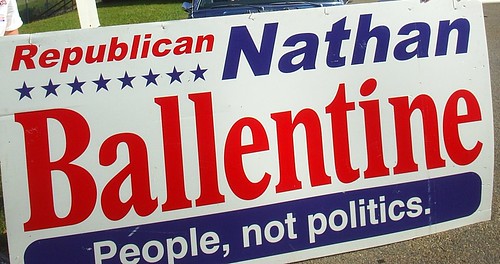 IRMO, SC – One of the state legislature’s chief proponents of fiscal discipline and increased transparency in state government will file for re-election Tuesday.

Representative Nathan Ballentine has served the people of Irmo, Chapin, and Dutch Fork in the SC House of Representatives since 2005 and wants to return to the state capital to continue his work on behalf of the taxpayers and to further his efforts to restore people’s trust in government.

“It’s well documented how leadership punished me last year for standing up for my constituents’ right to know how elected officials vote in Columbia. That was a fight I would do again to get the results we finally achieved”. On-the-Record voting was another common-sense reform that Ballentine led in an effort to provide greater transparency in the political process in South Caroilna. Because of his efforts, more votes than ever are now recorded for the public to see.

“I think the good-ol’ boys thought I would back down and get in line after what they did to me. They were wrong. I work for the people of District 71, not the politicians in Columbia”.

In yet another fight for good government, Ballentine worked to pass his bill that will reform the state’s Campaign Finance Disclosure laws. The bill passed the House last month and will provide sunshine during the current “blackout period” two weeks before election where special interest money had been hidden from public view until after voters have gone to the polls. The bill also requires more elected local officials and candidates to file on-line with the State Ethics Commission.

Every year in office, Ballentine has been recognized as a “Friend of the Taxpayer” by the SC Association of Taxpayers. In addition to his fiscal conservatism, he has received high marks from the conservation community, the State Chamber of Commerce, and several other organizations around the state. Ballentine continues to honor a pledge he made six years ago by donating his legislative salary each year to the Irmo, Dutch Fork, Chapin, and Harbison communities – including several educational scholarships.

Ballentine’s focus will continue to be on People, Not Politics – the belief that led him to seek office six years ago. “While it’s nice to be recognized by various organizations for my hard work; it’s more important to me that my constituents are pleased with my service and that I continue to vote for the best interests of our people.”

For more information, please visit www.nathansnews.com where Nathan openly discusses issues of importance to House District 71 and the Palmetto State.