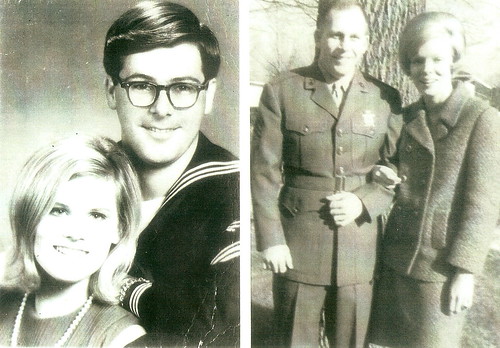 Yes, both of our parents got married on the same day, March 15, 1969! Mitsy and Dennis Ballentine (left) and Harry and Susan Nanney (right)

Dennis and Mitsy Ballentine will celebrate 40 years of marriage on March 15, 2009.

Having met in at A.C. Flora High School (Columbia, SC), Dennis and Mitsy were later married in Columbia and moved to Taylors in 1972 with their son, Nathan. They currently reside in the same house in Brook Glenn Gardens where their love has deepened over the past several decades.

Mitsy retired from Greenville Technical College in 2006 after more than 30 years of service. She continues to be actively involved with her church Taylors First Baptist and devotes her spare time to her beloved grandchildren, Sarah, J.C. and Emma.

After years in the public accounting field with large businesses, Dennis went out on his own several years ago and presently continues his practice (Clark, Ballentine & Co.) on South Pleasantburg Drive. When time permits, Dennis loves to follow his Gamecocks and enjoys being “Big D” to Nathan and Karen’s children.

Their marriage is a testament to the Christian values they have instilled in their family over the decades.

Harry and Susan Nanney of Black Mountain will celebrate 40 years of wedded bliss on March 15, 2009. They met and dated while attending what was then Montreat Anderson College. They later married in Indianapolis at Northminster Presbyterian Church.

Harry served in the United States Marine Corps and retired in 2002 from Caterpillar Equipment after 30 plus years of employment. He enjoys keeping honeybees and serves on the Black Mountain Parks and Recreation Commission.

Susan is a homemaker and enjoys volunteering at the Black Mountain Chamber and Museum. She also serves as a Deacon at First Baptist Church of Black Mountain, where she and Harry are members.

We, their children, wish them many more years of marriage and blessings, and to continue to live by the engravings in their wedding rings – Semper Fi.