If you’re like me, you may have missed this story recently about a local high school student pitching in to clean up the roads and neighborhoods in our community.

Last night, I just happened to see her and her mom on the side of the road; so I stopped to learn what they were doing.

I’m donating to her today and hope you will, too (click here)!

Here’s more on her story from WLTX:

CHAPIN, S.C. — Morgan Murphy is a sophomore at Chapin High School, raising money to go to Europe by cleaning up her community.

“I thought that it would be a good idea to have a fundraiser… I could pick up the trash, help the community and hopefully get a few dollars,” Murphy said.

The teen is raising money for a Science, Technology, Engineering, and Mathematics (STEM) field trip that her high school takes annually during Spring Break.

Next year, the school plans to travel to Europe to show students medical practices that were used in Scotland, France, and England. To raise enough money to go on the European trip, Murphy is cleaning up trash in exchange for donations to her travel funds.

“I’ve gotten a couple donations that were $100, some were $25,” Murphy said excitedly. “People are really into this.”

Residents in Chapin are keeping track of Murphy’s efforts on Facebook and donating money to her trip once trash is picked up from around their neighborhood.

Morgan’s mom, Rebecca Murphy, says her family has never seen this much litter before.

“Our family has actually moved four times. This is the first state that we’ve experienced this much trash on the sides of the roads,” her mother explained.

Morgan started collecting trash for her fundraiser two weeks ago, and so far, she has picked up 40 bags of trash along Three Dog, Dutch Fork, and Hiller Road. Murphy goes out and cleans up trash when she’s not at school or work, which isn’t a typical activity for teens her age.

“I’m super proud of her having the initiative,” her mother, Rebecca, said. “She didn’t come to us to ask us for money.”

According to the National Conference of State Legislatures, South Carolina does not have a Bottle Bill that refunds the value of the container. However, it is free to sign up to become a ‘Litter Champion’ in Lexington County and you receive bags, gloves, a safety vest, and a trash grabber. 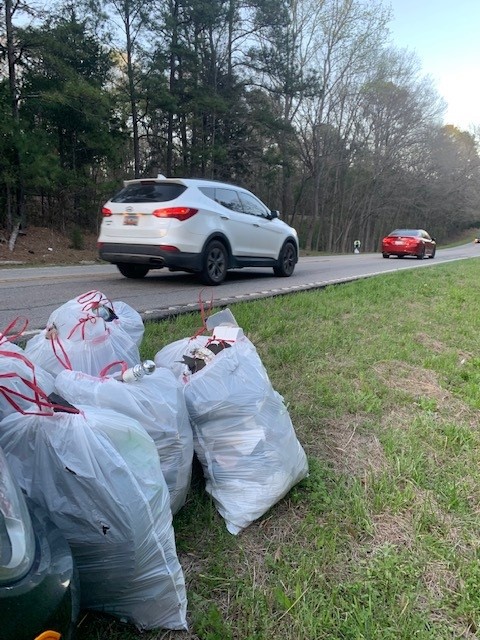