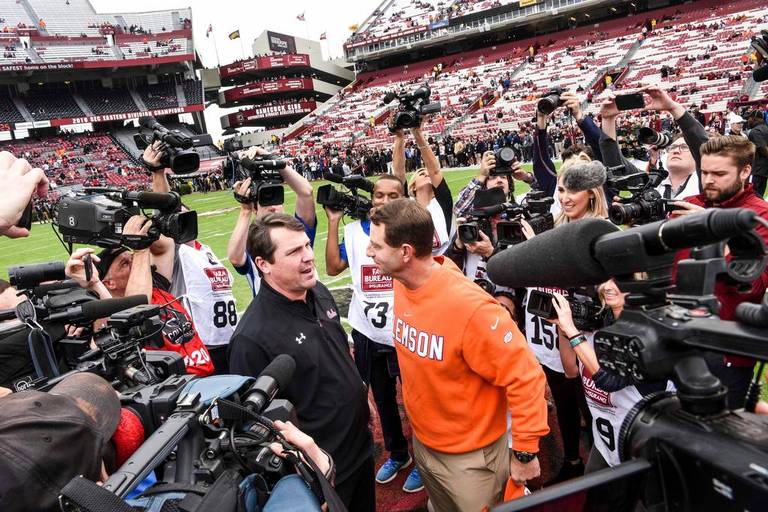 There are certainly more important things in life; but this week I’ve received several calls about one of the country’s longest running football rivalries. NathansNews readers may recall in 2012 when I filed a bill to assure the series would always play. Well, it seems the series could be in jeopardy this year.

Currently, the rivalry is the 2nd-longest uninterrupted series in the country, behind Minnesota v. Wisconsin (1907). The two teams have played every year since 1909 and have played 117 times overall

The South Carolina state representative from the Chapin area had been approached by a constituent, asking if the South Carolina-Clemson rivalry was held together in some way by state law. In a time when conference realignment signaled an end to some historic rivalries, Ballentine learned it was not and attempted to change that.

“Now that I’ve been there a little bit longer, I probably would just pick up the phone and call the presidents and the board members and have a discussion that way,” Ballentine, whose bill was ultimately voted down, said Thursday. “We’ve got other things we need to be working on but, I mean, I didn’t see a pandemic eight years ago.”

The current threat to the rivalry that started in the late 1800s and has been played continuously since 1909 is the novel coronavirus and what it could potentially do to college football schedules. The Big Ten announced Thursday it would go with conference-only schedules this fall, and the ACC is reportedly on a similar path.

If things were held strictly, no nonconference games for Clemson would mean no South Carolina game. The SEC has been operating on a slower timeline than some of the other schools, but its large set of contingencies includes at least one option for only conference games.

Looking at the present set of information, Ballentine wondered why if South Carolina was allowed to play SEC teams, it shouldn’t be able to arrange something with the Tigers. The Gamecocks’ 2020 conference schedule includes trips to Nashville (more than 440 miles by car) and Baton Rouge, Louisiana (two hours by plane or more than 700 miles).

“The thing that I don’t understand is, COVID doesn’t know what teams on the other side of the scrimmage,” Ballentine said. “If you’re gonna play conference games, why can’t you drive 100 miles to play an in-state rival that you’ve played for hundreds of years.”

He noted player safety is important, but wondered why a trip to Gainesville, Florida or Raleigh, North Carolina would be any more worrisome than a drive to the Upstate.

“Let’s be honest,” Ballentine, a South Carolina alum, said. “In this state, you’re either a Gamecock or a Tiger, with the exception of SC State and Furman, Citadel and stuff like that. It just means a lot to us.”

He also added sports would be a welcome distraction and that it would be a disappointment if football was played but the game didn’t happen.

Ballentine’s push to codify the in-state rivalry was actually not the first in South Carolina history. In the early 1950s, the Tigers were put on probation by the Southern Conference. Part of the punishment was not being able to play members of the 17-team league.

So the state general assembly passed a resolution mandating the teams play.

That almost assuredly won’t come to pass this time around. Should there be even a crack of leeway or a chance for a waiver, the teams will take it. At worst, the game would be valuable television property; at best, a chance to sell tickets in a year when departments will be hurting financially.

And it’s not close to a given there will even be conference-only football this fall. The Ivy League has pushed back to the spring, and it’s very possible other leagues will have to follow suit.

So how about South Carolina making the trip to Death Valley when the weather is starting to warm up?

“Let’s keep the player safety in mind first and foremost,” Ballentine said. “But, you know, football has always been a fall sport.

“Maybe doesn’t get played in the fall, maybe it’s just postponed. I think a postponement is better than a cancellation, that’s for sure.”

“A BILL TO AMEND THE CODE OF LAWS OF SOUTH CAROLINA, 1976, BY ADDING SECTION 59-101-435 SO AS TO PROVIDE THAT THE DIVISION I VARSITY FOOTBALL TEAMS OF THE UNIVERSITY OF SOUTH CAROLINA AND CLEMSON UNIVERSITY SHALL ANNUALLY PLAY ON A HOME AND HOME BASIS UNDER SUCH TERMS AND CONDITIONS AS THE RESPECTIVE BOARDS OF TRUSTEES MAY DECIDE.”