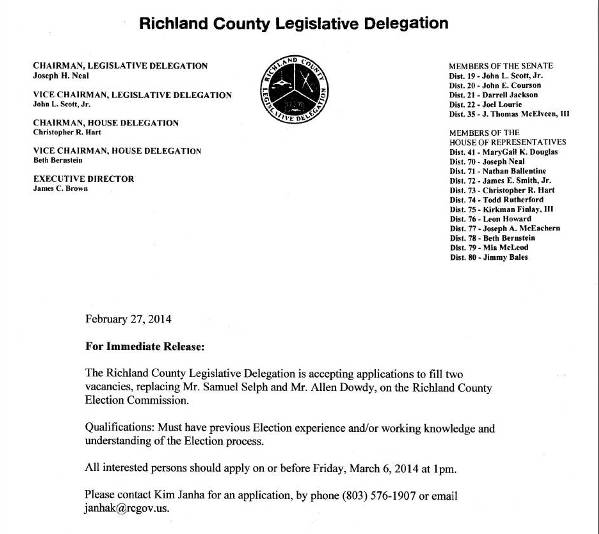 Why can’t this get fixed? I’m asked. What is the delegation doing about it? I’m asked.

For that, you may need some background. Sadly, when the 17 members of the Richland County Delegation only meet ONCE a year (usually December), not much can get done. And when you only have three Republicans and 14 Democrats, getting a fix requires bipartisan help. Since November 2012, very few Democrats have seemed eager to help; but I do want to say there are some Democrats who, like me, feel there’s too much resistance from other colleagues on the delegation to make changes we all know are needed.

Today I noticed these two editorials in The State.

Every member of Richland County’s reckless elections board should resign

I agree with those editorials and many of you that tell me that “we” need to replace the board; but how? If “we” can’t get enough votes in the delegation to remove/replace current board members, we’ll have to hope the board members will do it for us.

Many have asked me how are the board members are chosen? That has been a sticking point with me for ten years as Richland handles the appointments process much differently than Lexington County.

One would think with this board/commission continuing to cause our citizens problems, my calls to have the entire delegation review the applicants would seem like a positive change. Well….my suggestion of this has been shot down several times in the past. More recently (last week), I asked that I be sent every applications of everyone who has applied – the day they apply – so that I can reach out to voters in the county and encourage them to apply if we do not yet appear to have many applicants…or many qualified applicants. (This is why I’m sharing the application today with you. To date, I haven’t been given the information about who has applied nor seen their application – even though I personally know of at least two county residents who have already sent their applications to the delegation.)

HOW CAN YOU HELP? If you are interested in serving on the commission, click above on the notice and print the application and send it in – before the deadline. It’s not an easy process…and the job obviously won’t be an easy one…but if you’re qualified and your desire is to effectively run a board so that your county won’t be mired in this mess much longer, please apply.

We all know the problems. What is being done to fix them?

A year and a half ago, I outlined what I believed were four necessary steps to avoid another fiasco. None of this could be done on my own; but I do wish to thank those like-minded delegation members who supported some or all of these steps.

1) Personnel changes
From The State 12/3/2012 “He (Ballentine) is the first member of the county’s delegation to publicly call for her (Lillian McBride’s) dismissal. Others joined and, although it took a while, and the board actually moved the former Director instead of dismissing, change at the top occurred. Of course, after another director was hired – and since fired – the question now resurfaces, is this board even constitutional? More on that later.

2) Legislation to hold the board/commission more accountable . Representative Finlay and I joined a colleague from Horry County in hopes we could provide more (any) accountability to this commission. H.3197 ultimately died in a House Committee when colleagues narrowly defeated the bill because of concerns over putting the commissions under the Secretary of State. Recently, I supported H.3198 along with colleagues James Smith, Mia McLeod and Beth Bernstein. This bill is on the House floor for debate and, instead of putting accountability for the board/commission with the Secretary of State, would put it with the State Election Commission. We’ll see if this bill can pass the House this coming week before we begin the floor debate on the budget the following week.

3) Reduce the size of our precincts
To help our community, I followed through on this plan by filing H 3724 early in the session (February 28, 2013). The bill passed the House less than 2 weeks later on March 8, 2013. The bill sat in the Senate until ultimately the entire delegation passed a county-wide bill reducing precinct sizes months later. That bill incorporated the changes I submitted previously for House District 71. NOTE: Assuming the Voter Registration & Elections office can deliver, notices will soon go out informing voters of their polling location (some will be new, some will stay where they voted last time). Regardless, precincts in our community will have fewer voters than previously. I will be sure to keep our voters updated on this through my website, regular Community Updates, Facebook and Twitter. Everyone will know where they will be voting for the next election!

4) Revisit early voting debate
Debate still continues but we did revisit “early voting”. Nothing final has passed yet; but I did revisit this debate and was able to support measures I had not previously endorsed prior to the fiasco we had here in Richland County.

Obviously, steps 1 and 2 above are still needed and I ask that you contact your Representative and Senator if you agree as well. As we’ve all heard often (and Representative Finlay shared in an interview last week): the definition of insanity is doing the same thing over and over and expecting different results.

If you want different results, please contact your Representative and Senator and express your concerns. Somehow, many delegation members continue they don’t hear from their voters about this.

For more background, below are related posts that have appeared on this website since Election Day 2012.

November 16, 2012 What questions do you have regarding the Richland County election mess?

November 24, 2012 Richland County Election Analysis: Duncan Bell NOTE: When given the chance, the delegation did not vote to appoint Mr. Buell to the commission.