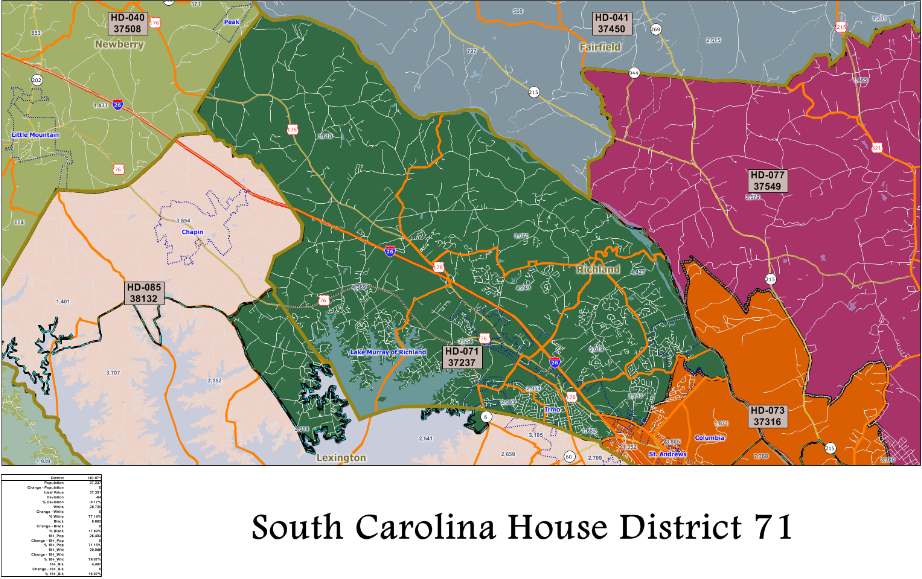 ( Click here for larger version of the new proposed district.)

After months of statewide meetings, the House Judiciary committee is set to being debate next week on the new proposed House District lines in our state. (This occurs every 10 years based on updated census data.)

Earlier this year, Irmo News readers and my Twitter followers learned that our community was one of the fastest growing in the state during the past 10 years and that presently District 71 has more than 45,000 individuals. That is approximately 8,000 over the new proposed House District sizes each member should represent in 2012.

What does this mean to you? Basically, some of you that I currently represent will be represented by another House Member in another district in 2012. With population shifts, this happens every 10 years. Regardless whether you can vote for me or not, I feel my job is to represent the entire state. In reality, you’re still in the community and you can always contact me anytime.

As it’s currently drawn now, the south end of the district will shift to my colleague in Richland County, Representative Hart. Today, our districts connect further down Broad River Road around Harbison State Forest and the Department of Juvenile Justice. Going forward the line would move north towards Lake Murray Boulevard.

As it stands, my church (Riverland Hills Baptist) and Palmetto Parkridge Hospital would be just outside the new district lines. Obviously, I wish that wasn’t the case either; but this process is very complicated and to make numbers work, there’s not a way for me to make that happen without being detrimental to colleagues around me.

Some members have to gain numbers while others have to lose numbers. All dependent on if the House district has gained or lost population the past 10 years.

If you have any questions or concerns, please let me know. You can also view the entire Midlands region and state by going to the House Redistricting website.

Also, you’ll find the new proposed US Congressional Seat for the lowcountry. SC will pick up another voice in Washington based on our state’s population growth.