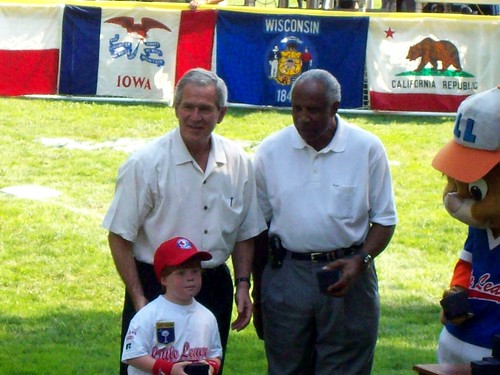 (As you recall, last month I wrote about our own Sam Bryant who was selected to represent our state at the President’s annual t-ball game. Sam’s parents sent a great recap of that wonderful experience and I wanted to share it with you. UPDATE: WIS-TV ran a story tonight as well!)

Sam’s Day at the White House

What an exciting day. It started at 10:45 AM at the Marriott Downtown Washington just 3-4 blocks from the White House. All 50 states and the District of Columbia t-ball players showed up for lunch and to get uniforms and to meet their teammates. We sat at a table with Noah Wubben, the T-Baller from Iowa and had a great time. After lunch, Stephen Keener, President and Chief Executive Officer for Little League Baseball and Softball welcomed us and told us what will be happening this day. Kenny Chesney will be singing the National Anthem and Frank Robinson (Member of the National Baseball Hall of Fame) will be the Honorary Commissioner. Their will be four teams (Western, Central, Southern and Eastern), playing two games: Eastern U.S. vs. Central U.S. and Southern U.S. vs. Western U.S. We were all very excited and you could hear the kids saying “When are we going?!”

At the end of the announcements they call teams to the back of the room for the handing out of uniforms. Sam was part of the Southern tams which consisted of Alabama, Arkansas, Florida, Georgia, Kentucky, Louisiana, Mississippi, North Carolina, Oklahoma, South Carolina, Tennessee, Texas and West Virginia.

Part of the packet they received they all got baseball cards so after we got the uniform on all the kids in the room started trading out cards and going to meet everyone. Sam was able to get cards from all of his teammates and from some other teams’ players. Then it was time to go to the White House. The Southern team huddled and cheered before we left for our 4 block walk to the White House.

Then we were off, 51 T-Ballers and their families navigating the streets Washington DC. A block from the white house we were greeted by a secret service member who escorted us the final block and we got a police escort to cross the final street in front of the White House. Of course at that point all the kids were thirsty and tired and kept asking when they could sit down. We met our White House representative who was going to get us through security and give us our White House tour.

After the tour, we headed down this walkway which is probably a drive-way to the front of the White House on Pennsylvania Avenue which is the South Lawn. They gave us a few minutes with our kids, gave them water and bathroom breaks then the teams separated and went off to practice.

Then for about an hour all the team went on the field, got their position assignments and did some practicing.

We were all given tickets to special bleachers and hand fans trying to stay cool. They were great have all the free water, soda and Powerades we wanted along with snacks. At game time, things started to change, all the media started showing up, and more Secret Service people were coming to our side. There were some assigned seating and those people were escorted in, we knew the President and First Lady must have been on their way.

Everyone kept looking toward the White House then Mike Golic and Mike Greenburg (hosts of Mike & Mike on ESPN) came over the loud speaker announcing the president’s and first lady’s arrival. We saw the Mrs. Bush come in and take her seat about 10 feet away from us and then it began.

Then The Western US vs. Central US teams’ game began. They had Ryan Sandberg (Member of the National Baseball Hall of Fame) as their first base coach and John Smoltz (Eight-time MLB All-Star Pitcher, Atlanta Braves) as their third base coach.

All of us in the stands were just cheering for all of the kids and laughing and encouraging them. Surprisingly there was not a shy kid in the group and all came right up to bat, some took three or four swings but all hit and all got to run the bases even if they were out. The kids were just having a great time.

After the first game the Postmaster General came out and with the President and others on the field they unveiled the new stamp commemorating the centennial for the classic baseball anthem, “Take Me Out to the Ballgame” for which Kenny Chesney came back out to lead us all in song. I have to note that during the singing Sam was just dancing on the field where they had the kids lined up for the presentation.

Then our game began. Our first base coach was Kevin Miller (First Basemen, Baltimore Orioles) and Rick Monday (Two-time MLB All-star and LA Dodgers Broadcaster) was our third base coach.

The South was up first to bat. Sam was number 5 and was fifth in the order. He came up to the ball and hit it on the first swing!

A video is attached of him swinging, hitting and running to first base and then another of him running home. Of course we were yelling and cheering and he was just having a great time.

Then it was the Western’s turn to bat and the Southern team was out in the field. Sam started in left field then was moved to third base when our first base player’s arm was injured by an unexpected defensive throw.

When the game was over, the kids got a standing ovation and they got into two lines and congratulated each other with the traditional slapping of hands. Next all four teams went on the field to be presented with an autographed baseball from the President and Frank Robinson and to shake their hands. Sam will tell you that he did not get to shake the President’s hand and that is true because when he was running to meet the President his hat was falling off and when he went to shake hands the President was fixing his cap. Missing the handshake also upset the timing of Sam’s quarter gift he had been planning to give the President since it had an eagle on it. Sam was OK though when he realized that he could just keep the quarter himself.

Wow! What a day and we were not done yet. All the kids and their coaches were ushered up to the front of the White House for a group picture while we waited at the bottom. There’s Sam to the right of the President and the First Lady.

All of a sudden we heard the kids screaming and they are all running either on the grass or the driveway to us. We were asking them a million questions they were asking for drinks and food.

It was now time for a hotdog picnic in the shade and the kids just played, played, and played. We ended out the day with a shot of Sam behind home plate.

As you can see in the picture Sam had changed into his tennis shoes and all he wanted to know is how long the walk to the Metro station was going to be.