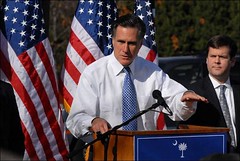 With less than a month to go before Republicans go to the polls in the Palmetto State, I figured I’d write tonight about the contest for the GOP Presidential nomination.

First, I have no idea how this thing will end up. If anyone tells you they know, they’re lying – or just trying to impress you with their prognastication skills.

Most national pundits will tell you it all hinges on the early states and that some candidates are better positioned there than others. Will that momentum carry on to Florida, California, etc? Who knows? Could someone be shutout of the early states but come on strong in the larger ones? Who knows?

How will the votes shift when candidates start withdrawing from the race…after Iowa…after New Hampshire…after South Carolina? (Don’t forget about Michigan.)

What I do know is this: on any given day you see different information from different reports. And there has been alot of movement for almost all the candidates during the past several months.

On the national level (NBC/Wall Street Journal poll), it appears Rudy’s lead has slipped and now Governor Mitt Romney has tied him for first.

Personally, I don’t give the national polls much weight since the votes in the primary come in on a state-by-state basis and momentum can change quickly if someone falls behind too quick.

In Iowa (the first state to vote), The Washington Post/ABC poll has it down to a two-man contest between Governors Huckabee and Romney – with no other candidate garnering double digits.

In New Hampshire (the next in line), Rasmussen has Romney in the lead with McCain gaining ground after Democrat/Independent Seantor Joe Lieberman endorsed his colleague from Arizona.

Right here at home, there’s conflicting reports but mostly they appear to point to again Governors Huckabee or Romney. Rasmussen has them tied for first while CBS has Huckabee first and Romney second.

As you know, my guy is Romney. He’s been the one that’s been attacked from Day One and so far he’s done very well. Others have surged or fallen but he steadily has impressed voters once they get to know more about him.

How many of you actually had heard of him until the past few months? He didn’t carry the same name-recognition of others but his message is obviously resonating with Americans.

Particularily it seems folks appreciate his tough stance on illegal immigration. Recently, I learned that SC may also be at-risk to having illegal aliens awarded scholarships or in-state tuition and I plan to file legislation to close any loopholes that may exist in current law. (Senator Kevin Bryant and I plan to file companion bills).

For me, several things led me to Governor Romney.

* He’s not a Washington Insider. He’s a successful businessman who can fix our spending problems.

* He’s not going to embarrass us (scandals, personal problems, etc).

* He has a vision for a positive future – stronger economy,stronger military, stronger families.

Regardless who you support, please remember to get out and vote next month in either the Republican or Democratic Primaries in SC. Both primaries should have a huge impact on the national landscape and will probably determine our next President.